Note: We purchased the Tokina Atx-M 85mm F1.8 lens used in this review with our own money. This review is independent and is not sponsored by Tokina or endorsed by them in  any way.

At a glance: Tokina's new lens is a solid optical performer with many positive attributes including ultra fast and responsive autofocus, beautiful tantalizingly smooth bokeh, and a high quality minimalist design. This lens competes closely with lenses like the Viltrox 85mm f/1.8 STM and the recently released Viltrox 85mm f/1.8 STM Mark II. However, the Tokina comes with a $100 heftier price tag. That $100 does get you what I consider to be a superior customer service experience and 3-years under warranty versus the one-year that Viltrox offers. So for those who like having the assurance of 3-years under warranty and top notch support, I'd highly recommend opting for the Tokina. Also, for those wanting to throw down $100 more, there's Sony's own 85mm f/1.8 and Samyang's highly capable 85mm f/1.4 with a tad faster and brighter aperture.

Tokina's new lens represents an excellent balance of performance, quality, and support. While the first copy of their 85mm f/1.8 that I received was defective, Tokina's support team did an amazing job communicating with me and replaced the lens free of charge. I was genuinely impressed with how handled everything from start to finish. What was even more impressive is how they went to the trouble of carefully checking the new lens. The replacement copy I received was sent out to mecare of their facility in Japan and and had to pass through rigorous quality checks to ensure I received a perfect copy that was carefully shipped out to me. I've now had a good deal of hands on experience with the lens and I've got to say I'm really pleased with it. It's a genuinely fun lens to shoot with and it has a charachter that's unique to it. 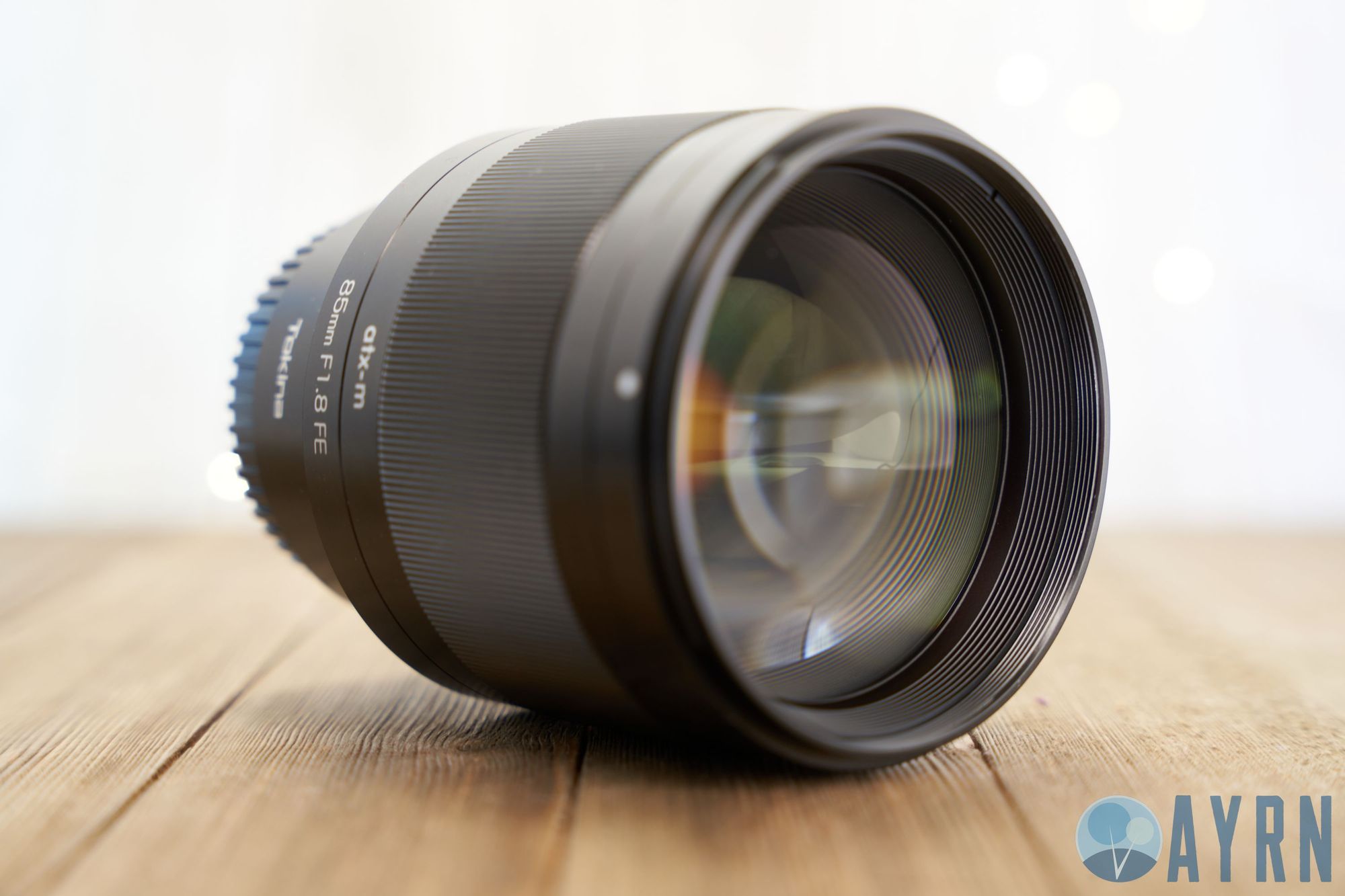 Tokina's new 85mm offering has excellent optics and is a capable performer as well. While a bit more expensive than the remarkably similar Viltrox 85mm f/1.8 and f/1.8 Mark II, this lens comes with 3 years of support (versus 1) and sports a design that is a bit more refined and sophisticated in my opinion.

The packaging and design of the lens are both very nice.

The packaging and design of the lens are both very nice. On taking the lens out of the box, it feels solid and appears to be well constructed. The gloss black finish is tasteful, and the overall appearance is extremely minimal with no tactile controls to speak of beyond the metal focus ring.

Flipping the lens over, I see a charcoal gray colored sticker with the Tokina logo printed prominently on it and right below that the words "made in China." I guess, at least for this lens, Tokina has gone the route of Tamron in outsourcing their once Japanese manufacturing. Most people probably won't care about this, but I'm a massive fan of the quality and excellence of Japanese glass, and it was a bit of a letdown, to be honest.

I found the autofocus on this lens to be very fast and responsive. In fact, I'd say that perceptually it seemed nearly as fast as Sony's GMaster and faster than most of the other competition. Viltrox released a new Mark II version of their 85mm lens that I've been reviewing and I'd say it's right on par with that.

Eye autofocus on this lens worked every bit as well as I'd expect from one of Sony's own native lenses and I was able to grab quick focus on the eyes of moving subjects effortlessly.

The majority of images I captured were bang-on in focus

I shot a ton of images of various subjects ranging from people to animals and tried to really run this lens through its courses. I was pleasantly surprised to see that the vast majority of my images were exceptionally well focused, even in cases where the subject was moving.

The focus ring is a delight to use

Turning the focus ring, it feels firm yet smooth and the extremely long throw is useful for being able to fine tune the focus with exceptional precision that almost makes you forget that this is a focus-by-wire lens like most modern lenses are.

Overall, testing this lens was highly enjoyable and I look forward to reviewing further lenses from Tokina in the future

Overall, this is a solid new addition to the already highly competitive 3rd party lineup of 85mm primes for Sony full frame e-mount cameras. While it'll run you a bit more than its cheapest competitor, Viltrox, it also comes with a generous 3-year warranty period and excellent support which I've experienced first hand. To me, this justifies the additional cost.

Image quality is an area that this lens really shines and, as you'll see in the test images, the sharp foreground and creamy background defocus are hard not to appreciate. Tokina is calling this the "bokeh monster," and it's not an unreasonable title for this lens. At this price point, this lens does delivers wonderful bokeh and great optical quality overall. You can see a full gallery of high resolution images captured with this lens here.

Bokeh is about as smooth and creamy as you could ask for with this lens and it's definitely one of its strongest assets. While at closer distances it can get just a hair busy, overall its exquisite and really lends a sense of pop and dimension to the subject of images.

The Tokina ATX-M 85mm f/1.8 lens delivers excellent build quality, featuring solid metal housing and a textured metal focusing ring, which is contrasted by a rather average looking plastic lens hood. It feels substantial in the hand, and definitely comes with a overall appearance that's a bit above it's price point. I'd say its design looks a tad more polished overall than the similar Viltrox 85mm f/1.8. On the negative side, unlike the similar Viltrox, the markings on the lens are just painted on rather than being embossed, which I think makes for a more premium look as well as better durability. To be fair though, as of the Mark II version of the 85mm lens, Viltrox has begun printing settings information as well.

Aside from exuding a clean appearance that's sure to delight minimalists, this lens is marginally heavy for it's size, but that heft gives you a sense of reassurance. I didn't personally find it burdensome to carry around during the many hours of test shooting I did in the field. On the up side, it's not a terribly long lens and it balanced well enough on my Sony A7riv.

As I mentioned previously, the focus ring on this lens is firm, but very smooth to turn and that makes it very precise, especially for a focus-by-wire system.

Aside from freezing my camera constantly, the poor and unpredictable autofocus performance was one of the hardest things to overlook about this lens.

Autofocus on this lens is really, really good. Especially if you consider the fact that Tokina, like other 3rd party lens manufacturers, essentially has to reverse engineer the technology to get it to work with Sony camera bodies. In this sense, it's incredible that this lens seems to perform better than many of Sony's own lenses. While it's not quite GMaster level in this department, it's really not far off either and the difference is barely noticeable.

I tested AutoFocus in every mode and am happy to report that the stellar performance I described earlier appears to carry over into all of them. The focus motor itself is STM, so it's not only quick, but it's quiet as well, making it a great choice for videography applications.

Aside from a metal focus ring, there really aren't many features to speak about here. There are no tactile buttons or switches, it doesn't have any sort of weather sealing, and there's no internal stabilization or anything like that. Of course any sort of settings can be changed via the setting menu of your Sony camera, or via a pre-programmed custom function button.

While looking at the grouping and number of optical elements in a lens alone doesn't really tell you much about its potential image quality, it is an integral part of the physical composition of each lens and what makes it unique. I created the chart below based on the information that Tokina has posted on their website to provide a visual demonstration of the optical composition of this lens.

As you can see, the Tokina 85mm f/1.8 features a 10 optical element design with a single Super-low Dispersion (SD) element made using FK01 and FK02 optical materials. This should help to reduce chromatic aberration. Tokina says they've also treated the glass with their own multi-coating (MC), a transparent chemical film that is applied in multiple-layers to help maintain accurate color reproduction as well enhance the overall sharpness capabilities of the lens.

We’re here to help you take the suck out of life for a few precious moments each day. We’re also here to inspire you to go out there and live life to the fullest. Ayrn is a digital sanctuary of ideas, inspiration, and laughter.

What’s on your mind? If you’ve got something you’d like to tell us, we’d love to hear from you! You can reach out to us any time you like using the information below: